Top 13 Swears From Orphan Black When And How To...

L et’s be honest, who among Clone Club hasn’t quoted a line or two from Orphan Black and applied it in real life situations? Chances are, your favorite go-to swear words since 2013 comes from the playbooks of Alison, Felix, and or Sarah!

Kudos to the OB creative writers for coming up with fresh euphemisms for curses every season! We have to hand it to Alison though- she’s the grand master of mouthing the most memorable ones. We picked thirteen of them and @zoshugrochu entertainingly explains what it means, how and when to use it. Oi, bookmark this page for reference! You need this within reach for any situation. Try one today!

Alison Hendrix said that, obviously! Clone Club knows that her character never says the f word, so she simply puts the word “Dickens.” But not too many knows that “Dickens” is a minced-oath for the word devil or hell. So whenever you feel disoriented, confused and you really don’t want to say bad words you can simply follow Alison’s lead.

Another soccer mom’s creation. I think we all love whenever she comes up with something like that. You can use it whenever you’re surprised or angry. I usually use it when something shocks me or someone scares me when I don’t expect it at all.

Oi, shite– with British accent. Sarah Manning says it a lot and personally I can’t even say  it without British accent anymore! This is pretty much the same as “holy fish sticks.” Whenever shocked, worried, angry or scared, you can go ahead and use it.

As we are sticking to Great Britain, I couldn’t forget about dear Felix and his “bloody hell!” He usually screams that whenever he is shocked or angry. Generally the word “bloody” can be replacement for “f*cking.” “Bloody” is also an abbreviation for “Christ’s wounds,” and/or “Christ’s blood,” but obviously it offended people’s religious feelings so they shortened it to just “bloody.” “Hell” was added later on for emphasis. Use it whenever you’re outraged, dumbfounded or otherwise flabbergasted.

This is just a more polite way to say “screw it” without using the f word. That way you can say it wherever and whenever you want without angry looks from elders or your family. Alison made it way more popular since she used it in her (one of many : )) tantrums.

This one is actually only used in Orphan Black and as you can predict, it was Felix who said that. I love this one, as you can basically put anything you want after the word “holy,” for example: “Holy Evelyne Brochu!” Doesn’t that sound amazing? And you can add some creativity to the way you speak it. Whenever you’re surprised or confused, go ahead with this one!

Basically French way to say “sh*t,” but it’s suitable for every kind of stressful situation you have in life. Typical Delphine with her facial expressions– “100% done.” I’m kinda surprised she didn’t say it more than three times on the show– one when she is protecting the sisters, two when being forced apart from her love, and three, being shot… Dang, Delphine, you polite girl! Also interesting fact: in ballet they use “merde” to say “break a leg” or good luck to each other before they go on stage.

The newest and only Alison could say it best! I was genuinely shocked when I found out what ‘stoop poop’ means. It’s basically making (excuse us!) poop on somebody’s porch (Oh, Alison…). So that’s what it means. You can use it whenever you’re upset or frustrated. I love this one!

The term usually used by Sarah to Felix or Delphine. And we know that she often says that when she’s bothered or someone is annoying her. If you want to tell someone to get off your face or sight, then this one is perfect.

Yep, Alison was confused and literally done with life when she said that. Cosima took her place for the election speech, her mother was upsetting her and the elections were getting  out of hand. So whenever you want to say “yep, that’s my life,” I think this line is perfect. Use it when you’re excited or wired too– eases the nerves.

I just had to put this swear, because I always find it very funny. Interesting fact: “meathead” actually means a guy who goes to the gym literally all the time, goes to nightclubs and all he talks about is his muscles. So maybe Sarah referred to Helena’s strength calling her “meathead?” All we know is that it makes sense. When Sarah softens up on Helena, the meaning becomes more endearing– some cute and feisty nickname for your sestras, brother-sestra or friends. 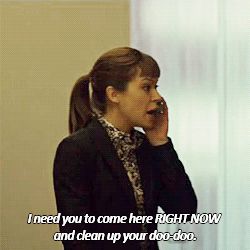 Alison obviously didn’t mean (excuse us again!) “poop” in this sentence. She said that to Sarah when Vic was bothering her rehab. Alison asked her sister to clean up her mess, talk to Vic and make him leave Mrs. Hendrix alone. That’s what it meant in that scene. You can use it whenever you want someone especially kids, to do what they should do.

Another one from the feisty yoga-hater mom. Well, what can I say, she lost it in that one moment. But, never broken enough to say the f word, so instead she used “fudge.” My advice: You better use this one around family/teachers/bosses. It’s the f-word but not quite! Plus it sounds cute!