9 Things that Happened at the SplitscreensTV + Orphan Black... 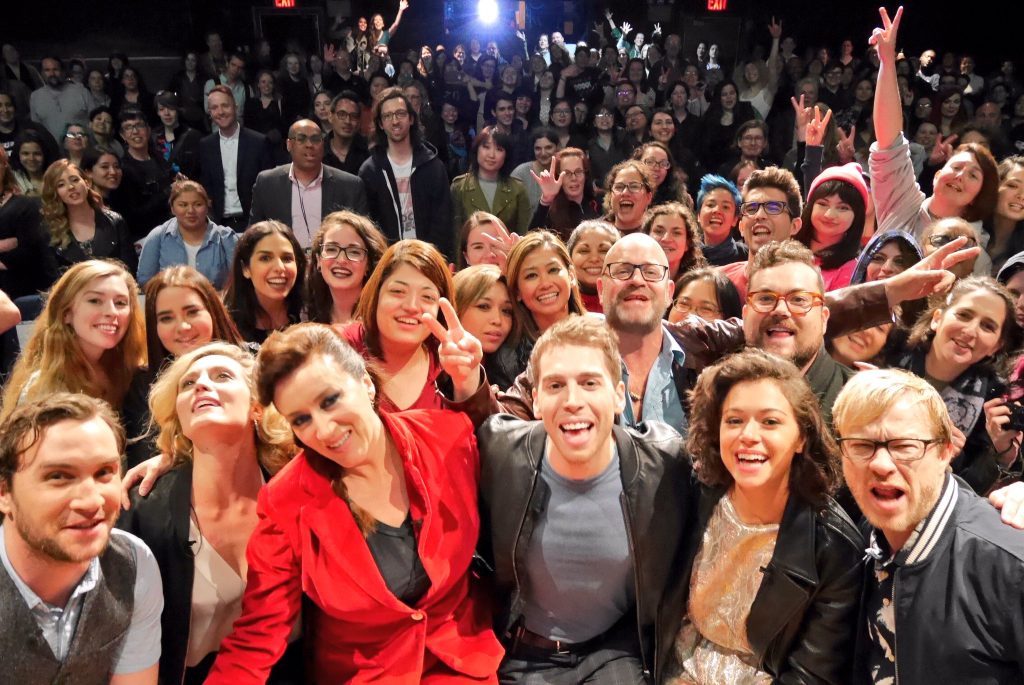 2. President & General Manager of BBC America, Sarah Barnett spoke to the crowd with a grateful heart, overwhelmed by the love and support of #CLONECLUB. So did the two geniuses behind Orphan Black, John Fawcett & Graeme Manson. The first four rows were reserved for press people and guests and there were some reserved spots all around the theater. Not everyone were part of #CloneClub and you could tell, they were thoroughly impressed by the interaction happening between the creative team and #CloneClub, full of respect and camaraderie.

3. Almost to 3 minutes in to John and Graeme’s chat with us, Evelyn Brochu casually and quietly sneaked in to an empty chair two seats away to where we were seating!! Magical hair and all, she smiled and looked at us and whispered before the start of the screening… “Shhhhh, I haven’t seen this yet.” It took guts and will power NOT to bother her!!! We left her alone… Apparently, she hasn’t seen the episode yet! She stayed at the first half of the episode. So we were in VERY CLOSE proximity with her for a good 15 minutes!! When all her scenes were over, she left!! Just like that, we died.

4. The crowd were cheering as that all too familiar opening sequence played on. When Evelyn appeared on the screen with “previously on Orphan Black,” there were extra cheers and noises. As we glanced at her reaction, she was smiling from ear to ear- I think she was very pleased by the crowd’s response! And not everyone knew, she was seating amongst us. The cheers were definitely spontaneous and not prompted because she was there! FYI, she was the ONLY cast who was seating in the audience. All the rest were tucked in backstage somewhere!

5. After the screening, the cast were called for the q and a. It was a short one! There were only 3-4 questions asked from the audience but each question was so great, almost like it was pre-chosen (but not!) it made everybody emotional and teary, panel and crowd. You could see on the (shaky) video that even Kristian Bruun was grabbing a Kleenex!

6. I gave Tatiana Maslany our CLONE CLUB GLOBAL business cards! She was already at the stage door rushing to head out and I barely caught her, I called her attention and didn’t think she would respond!! She turned around, smiled and took the freakin’ cards. It even fell right on the floor as I was reaching out and the staff were blocking me! She picked it up and waved!! We hope she didn’t misplace it before she could even read and know we exist!!

7. I come face to face with half of the cast as I was coming out from the restroom located in the basement of the theater. They were just arriving. John Fawcett was closest to me and all I could mutter was, “Hello Sir, Mr Fawcett!” (WTF was that? Total brain freeze!!)

8. Met some of the nicest people there is! Amazing how a fictional show can bring REAL people together! The first group in line arrived at the theater as early as 7.30 am! We got there at 2.30 pm and we were about 27th in line. There were people from everywhere- South America, Switzerland, France, Toronto, Vancouver, Minneapolis, Pennsylvania, Washington, DC, New Jersey, Los Angeles. We were coming from San Francisco via Boston and so we flew almost 3 thousand miles and then drove another 400 miles roundtrip to be in NYC! Totally worth it. We finished the night with a #CloneClub dinner together! Sweet!

9. We wouldn’t be at this event if not for pure LUCK. We were going to NYC to do “rush” since tickets were sold out. According to OB, it took only 90 minutes for the tickets to sell out on the day it was available to the public. We missed that. As we were searching online where to buy the IFC tickets (went to EBAY, other third-party resellers), we chanced upon a tweet from a Broadway artist running a ‘contest’ for a benefit. We joined in and two weeks later we WON THE TICKETS!! We seriously didn’t know we won until two days before the event! We are sooo thankful to Jaimie Linn!!

You’re our hero, @JmeLynNyc! Thank you for making this possible!! #orphanblack #SplitScreensTV Means the world to us! #CloneClub #lovewins pic.twitter.com/V5yl0GSm3Q

PS. The Broadway Heroes postcards that Jaime gave are 2 of 50 limited edition specially made as a special thank you to her donors. The artwork is original and by an artist from DC & Marvel named Dennis Calero.

Shoutout and THANK YOU to IFC SplitScreensTV for bringing this kind of event and attention to television– making it possible for fans to interact with the stars of their favorite shows and of course BBC America!!

This is the OFFICIAL video for the entire Q & A from SplitscreensTV. Merci!

WTF
0
WTF
I play on the computer all day and night and call it work. On occasion, I sleep. I LOVE travel, music and coffee (not necessarily in that order). Fan of Good music- mostly NOT heard on the radio! Spreading Orphan Black love since late 2016.